Glowing like a welcome campfire in the cold, harsh forest of Southwark, The Lord Clyde is a pub of such undeniable charm and good nature that I’ve never seen fit to question its rather unimaginative selection of beers. That there are always four or five on offer and all excellently kept seems more important and is highly appropriate for an inn that gets all the basics absolutely right.

Housed on one of the shortest streets in London, it’s the pub I always want to spend the longest time in. And with good reason. 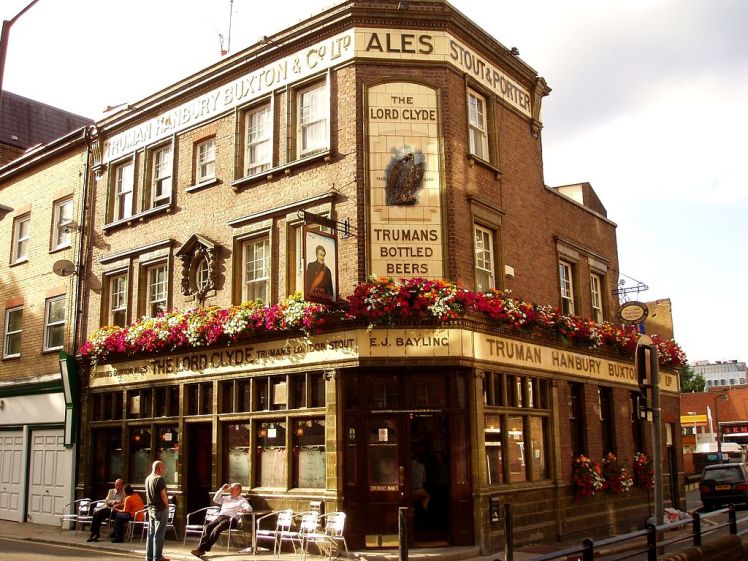 “Unrivalled mild ales and double stout,” proclaims the mirror, a seven-by-five Victoriana monster that dominates one wall. It keeps the pub in check. Red velour drapes guard the entrances, a throwback to the blackout no doubt, and these are matched by modesty half-pane blinds perched on brass curtain rails that shield the interior from external curiosity. If the beautifully crafted frosted windows haven’t already seen off the nosier passers-by, that is. Oak panels clad the walls while red vinyl sprung-foam banquettes skirt the room. You’re well cocooned in here. A pub bang in the middle of Little Dorrit country is poles apart from the decay and ruin chronicled by Dickens. In contrast to the place where William Dorrit spent most of his life – The Marshalsea, which shares its name with a street right next to the pub – The Lord Clyde, on Clennam Street, wants for nothing, in what is a lovely bit of literary symmetry, I think. There is everything you could need for drinking, eating, seeing, hearing, feeling and living. It would come as no surprise if they did rooms too. There is so much here that I’m amazed to have only just this evening spotted the fire flickering away under the mantelpiece. Almost all is bathed in a mandarin hue that adds to the sense of warmth and comfort. And of another more sepia-tinged era.

Clocks and archaic finery adorn the walls. It’s real heritage stuff, this. None of your faux aulde-worlde frippery; instead posters that have moved only to be encased in glass for their own preservation. A posteral history of the pub through the ages. It’s the kind of thing that would be impossible to install after a hefty refurbishment, which means there’s a real feel of something having evolved over years of good times. And it’s an amazing array of images too. Old men on even older forms of transport, pictures of rotund gentlemen doing nothing. Actual photographic evidence of what looks like a hotly contested hat box carrying competition. There’s even a woman who looks like David Icke.

It’s difficult to think of another seemingly standard boozer that offers five hand-pulled ales as if it were only natural to do so. Quite brilliantly understated, as is the rest. Unassuming. Uncomplicated. And yes, unrivalled.

So from a bitterly cold winter evening after a long week at work, I wend my way through the winding tributaries of Southwark to the wide, open bosom of the slow-moving Clyde. I’m armed with nothing but a cryptic crossword, a pen and a few pounds sterling, but immediately am feted like a returning knight by the landlady and landlord, who are a reassuringly long-serving presence in this place. They’ve broadened the range of offered ales since my last visit several months ago, but having been made to feel at home, I go for an old favourite of Young’s light and bitter. Or rather, that’s what’s poured for me, knowingly and generously, by the landlady. The service comes from a time uninhibited by targets, profitability and large-scale, commercially brewed ice lager.

And it’s a generosity of spirit that spills over into the measures. Nowhere have I encountered a more handsome helping of light and bitter than in the Lord Clyde. Half a bitter? Give over. It almost slops over the top as the glass is placed on the bar. How you’d fit a bottle of light ale in there afterwards is anyone’s guess. I don’t complain; nor do I ever.

One thought on “The Lord Clyde, Borough, SE1”